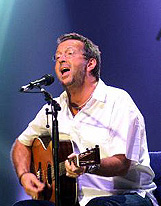 LONDON (AP) — Eric Clapton married his 25-year-old American girlfriend in a private ceremony on New Year's Day that included the christening of his two daughters, the presiding priest said Thursday.

The Rev. Christopher Elson, vicar of the 15th-century church of St. Mary Magdalen in Ripley, southwest of London, said he married the 56-year-old Clapton and Melia McEnery, and baptized their 6-month-old daughter Julie Rose and Clapton's 16-year-old daughter Ruth Patricia.

"It was a very happy occasion and God's blessing upon Eric and Melia in the married life as well as for Julie and Ruth at the beginning of their Christian lives," Elson said in a statement.

Elson said he had known about the wedding for some time and helped the couple plan the ceremony. He said no further details would be released.

Ginny Luckhurst, a London spokeswoman for Clapton's record label, WEA, said the guitar legend was not expected to issue a statement,

Clapton buried his 4-year-old son, Conor, at the same church 11 years ago after the child fell from the 53rd floor of a Manhattan apartment. The death inspired Clapton's hit single "Tears in Heaven."

A report in The Sun newspaper said a handful of close friends who attended the ceremony had not been told about the wedding in advance.

The guitar legend met McEnery, of Columbus, Ohio, in Los Angeles, where she was living at the time.

Ruth was born after Clapton had an affair with her mother, Yvonne Kellyn, in 1983. The rock star did not meet her until 1991.