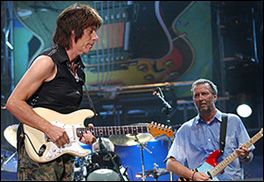 LONDON (VIP NEWS) — Eric Clapton and Jeff Beck will play a handful of shows together early next year, the first time the two legendary axe slingers have set out on a co-headlining tour.


The two performers–who were both members of The Yardbirds in the '60s, with Beck serving as Clapton's replacement on lead guitar when the latter left the band in 1965–will tackle a Feb. 18 appearance at New York's Madison Square Garden, along with two Canadian dates: Feb. 21 in Toronto and Feb. 22 in Montreal. The duo is also slotted to play a Feb. 13-14 pair of shows in London's O2 Arena. Details are included below.


The two shared top billing earlier this year during a show at Tokyo's Saitama Super Arena, the first time the pair had ever co-headlined a venue.


"Eric and I played together in Japan earlier this year and had a blast," Beck said in a press statement. "Since then we have been in regular contact and talked about doing a similar show for our fans. Looking forward to the shows in 2010."


"I've always considered Jeff Beck to be one of the finest guitar players around," added Clapton. "He's a friend, a great guy, and a truly gifted musician. We had such a fun time in Japan that it seemed natural to play together again."


In October, Beck filled in for Clapton at the Rock and Roll Hall of Fame's 25th anniversary shows in New York, after Clapton was forced to cancel while recovering from gallstone surgery.