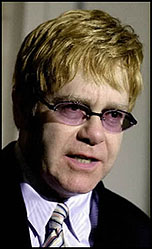 LONDON (AP) — Lawyers for Elton John went to the Court of Appeal Wednesday hoping to revive his multimillion-dollar negligence claim against his former accountants.

The star alleges that PricewaterhouseCoopers was negligent in burdening him with millions of pounds in touring debts and is seeking $11 million, plus interest, his counsel said.

During the hearing, which is expected to last two days, three appeal judges will consider whether to overturn a High Court ruling against John's negligence claim.

John's lawyer, Mark Howard, said Wednesday the star believed PricewaterhouseCoopers had erred because it failed to report to him that he, rather than his management company, was bearing the costs of paying tour agents.

This had made it impossible for John to reclaim the money from the management company, Howard said.

Howard said the hearing must investigate the duties and responsibilities of the management company and whether they or John were responsible for paying tour agents.

Howard said tours provided a sizable chunk of John's income and the star had agreed to pay his management company 20 percent of his gross earnings — "a very generous amount to pay for someone in Sir Elton's position."

During the High Court hearing, lawyers for PricewaterhouseCoopers and Reid depicted the star as a free spender with a poor grasp of his personal finances.

The 54-year-old performer admitted he enjoyed a "somewhat lavish lifestyle" and had spent dlrs 42 million on personal expenses — including $410,000 on flowers — over a 20-month period.

A High Court judge described John as "clearly a man of an uncommonly generous disposition" and a man of great intelligence, but who had "little or no interest in business matters."