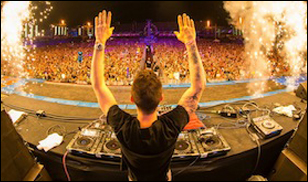 LONDON (VIP NEWS) — Insomniac Events has announced that it would bring its marquee festival Electric Daisy Carnival to London for the first time in 2013, bringing its total editions worldwide to five (including Las Vegas, New York, Chicago, and Puerto Rico).


The single-day event is set for July 20 in Queen Elizabeth Olympic Park, the site of last year’s Summer Olympics, and will be produced in partnership with storied U.K. festival brand Cream — a union potentially more meaningful than just one event.


Cream founder and CEO James Barton has served as president of Electronic Music for Live Nation since the concert giant acquired his company in May 2012. Its involvement could indicate that Insomniac, long reported to be for sale (at least in part), is closer to sealing a U.S. deal with Live Nation.


“We are really excited to be collaborating with Insomniac for what will be a spectacular event this summer,” says Barton. “Electric Daisy Carnival is already an important and prominent international brand, and we believe it will thrive in the U.K. in 2013.”


“Bringing Insomniac’s Electric Daisy Carnival experience across the Atlantic to London has been my dream for years and I couldn’t ask for a better partner than Cream, who is a worldwide fixture in electronic dance music culture,” said Pasquale Rotella, CEO and founder of Insomniac. “I’m confident that our collaboration will expose Insomniac’s returning fans and those who have yet to visit our United States festivals an opportunity to unite this summer in London.”


The partial line-up also announced today includes many of the same names that will probably play Electric Daisy’s flagship event in Las Vegas (June 23-25) — like Tiësto, Avicii, Steve Angello, and Alesso — plus U.K. favorites like drum ‘n’ bass icon Goldie. The full list is below, and is expected to grow over the next few weeks.


EDC London will join two other Live Nation-promoted festivals — Hard Rock Calling and the Yahoo! Wireless Festival — on Queen Elizabeth Olympic Park’s July schedule. The expansive venue is in the midst of a £292-million transformation — including the removal of certain Olympic structures, like the hockey and basketball arenas — which is scheduled for completion by spring 2014.