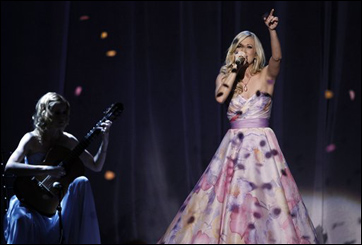 NASHVILLE (CelebrityAccess MediaWire) — Six-time 2010 Academy of Country Music nominee Carrie Underwood will continue her highly successful “Play On Tour” through the end of this year as a result of fan demand and thriving ticket sales. The “Play On Tour” is hydrated by vitaminwater and is now slated to run through December 19, 2010. Underwood will perform over 100 shows throughout the U.S. and Canada through the end of the year since launching her “Play On Tour” on March 11. Billy Currington and Sons of Sylvia will appear this fall as special guests.

Underwood will be donating 36 cents of every ticket sold for the fall tour dates to Save the Children’s United States Programs. This initiative was inspired by the “36 cents” written in the lyrics of her album track “Change” which addresses how even the smallest bit of spare change that one might have can add up to make a difference and help “change” the world. Fans can see Underwood perform this song, “Change,” on Idol Gives Back this Wednesday, April 21 on FOX. Save the Children is also a beneficiary of Idol Gives Back, and is the leading independent organization creating real and lasting change for children in need in the United States and around the world.

The “Play On Tour,” under the direction of Raj Kapoor, brought in renowned set designer Michael Cotten, perhaps best known as Michael Jackson’s production designer for “This Is It,” as well as Emmy Award winning costume designer, Soyon An, who created one of a kind costumes for Underwood.

Underwood is a five-time Grammy Award winner, a member of the Grand Ole Opry, the 2009 Academy of Country Music Entertainer of the Year, and three-time CMA and ACM Female Vocalist winner. Carrie Underwood has amassed more than 11 million in U.S. album sales since her debut CD in 2005, more than any other American Idol winner. Along the way, she has consistently broken new ground and became the first country artist in history to achieve twelve consecutive #1 singles. She also just made history at the ACM Awards April 18 when she became the first woman to win entertainer of the year twice.

Mercury Nashville singer/songwriter Billy Currington made his country debut in ‘03 with the Top 10 hit “Walk A Little Straighter” and the Top 5 smash “I Got A Feelin.’” He went on to duet with Shania Twain on “Party for Two.” On his second and platinum-certified album Doin’ Somethin’ Right, Currington delivered “Why, Why, Why,” which he co-wrote, and #1 hits “Good Directions” and “Must Be Doin’ Somethin’ Right,” the latter for which he won “Hottest Video of the Year” at the ’06 CMT Music Awards. In the fall of ’08, Currington debuted his third album Little Bit Of Everything, and he just picked up his third, fourth and fifth #1 singles consecutively, for “Don’t,” “People Are Crazy,” and “That’s How Country Boys Roll,” which he co-wrote. He’s co-written 19 of the tracks off his trio of albums and has been nominated for two Grammys and multiple CMA and ACM awards. He’s performed on The Late Show with David Letterman, The Tonight Show with Jay Leno, Good Morning America and MARTHA. He has toured with Brad Paisley, Sara Evans, Trace Adkins and Sugarland and been chosen as People magazine’s “Sexiest Man.” Currington's next single from his forthcoming fourth album is due out soon.

Sons of Sylvia recently completed their debut album Revelation set for release April 27 on 19 Recordings/Interscope Records. Their first single “Love Left To Lose,” has just arrived at radio, and the group will soon be shooting the video with famed director, Wayne Isham (Shania Twain, Muse, Keith Urban). Ashley, Austin, and Adam Clark (formerly known as The Clark Brothers who won FOX’s Next Great American Band) are longtime friends of Underwood, and the band is currently featured on her current album in a powerful collaboration called “What Can I Say.”