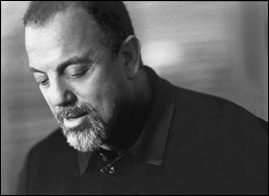 Billy Joel will be honored as the 2002 MusiCares Person Of The Year at a special tribute dinner, concert and silent auction held Monday, February 25 in Los Angeles. Joel who has amassed 22 Grammy nominations and five Grammy awards during his career, was chosen for his accomplishments as a musician and as a humanitarian. He will receive the award at .

The MusiCares tribute dinner is one of the most prestigious events held during Grammy Fest, a month-long cultural celebration which culminates with the 44th Annual GRAMMY Awards on February 27, that will be broadcast on CBS-TV.

"Billy Joel's gift for lyric and melody rank him among the industry's most talented and accomplished musicians," said Michael Greene, president/CEO of the National Academy of Recording Arts & Sciences. "He is a living symbol for what the Recording Academy stands for — his musical accomplishments are matched only by his endeavors as an advocate for music education. We truly are privileged to be honoring this gifted human being."

Among Joel's many accomplishments are induction into the Songwriters Hall of Fame (1992), induction into the Rock and Roll Hall of Fame (1999); being presented with the Johnny Mercer Award (2001), the organization's highest honor. In 1999, he was inducted into the Rock and Roll Hall of Fame, and he received the Recording Industry Association of America's Diamond Award for Greatest Hits Volume I and Volume II. The Diamond Award is presented for albums that have sold over 10 million copies, and with over 20 million albums sold, Joel's album is the highest certified greatest hits album by a male artist.

Joel has been very active outside his music career, donating his time and resources to a variety of charitable causes. A long-time advocate for music education, he first began holding "master class" sessions on college campuses more than 20 years ago. "An Evening of Questions, Answers…and a Little Music" has developed over the years, with Joel giving sessions at colleges across the country and around the world. In addition, he has held classes as a benefit for the STAR Foundation (Standing for Truth About Radiation) and to establish the Rosalind Joel Scholarship for the Performing Arts at City College in New York City.

Over the years, Joel also has lent his time and energy to raise funds for a variety of environmental organizations, as well as other causes including the Make-A-Wish Foundation, AIDS Project Los Angeles, the American Cancer Society, and most recently, he performed his song "New York State of Mind" on the "America: A Tribute To Heroes" television special to benefit those affected by the September 11 attacks.

The MusiCares Foundation was established by the Recording Academy in 1989 to promote wellness through emergency financial assistance, addiction recovery programs, and outreach and leadership activities. This year, MusiCares launched a capital campaign to work toward the creation of the music industry's first senior living facility, Encore Hall, which promises to provide aging members of the music community a dignified place to live.