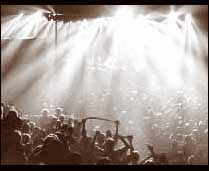 In August last year the Danish football club, OB, Odense Boldklub, bought one of the biggest music festivals in Denmark. The Midtfyn Festival was put up for sale by its owner at that time, Nina Færgeman, after one more year with a deficit of several million Danish kroner. The football club was searching for new activities, which could improve their economic situation. Today the count down for the first version of the new Midtfyn Festival has started, and for the Funen football club a new era as an entertainment company has started. Today it seems that it was a very important and wise decision that the club made last year, when they decided to combine football and music.


According to several people within the European live music business, the most secure way forward as a music organizer, if you want to work with bigger names and still survive in the future, is to add other activities besides music to the company and become an entertainment company.


Last year VIP News wrote about the situation on European live scene where agencies both blarge and small are struggling to secure their independence in relation to huge international entertainment companies buying up small agencies all over the world. One of these giants is American SFX Entertainment, which today is owned and renamed as Clear Channel Entertainment Inc. The company has swallowed large numbers of smaller and bigger agencies around Europe, and according to the Danish newspaper Jyllandsposten, Clear Channel Entertainment is now heading for the German market, where the agencies DEAG and CTS Eventim are the two largest today.


– Germany is one of the largest concert markets in Europe with hundreds of millions of Germans in Germany, Austria and Switzerland. Therefore Clear Channel Entertainment will be more visible there either by corporation or buying up, says Thomas Johansen from EMA Telstar to the Danish newspaper.


EMA Telstar is one of the Scandinavian companies, which today has turned itself into a huge and important entertainment organization owned by Clear Channel Communications Inc. EMA Telstar owns the Norwegian agency Gunnar Eide Concerts and the Finish Welldone, several other companies and recently acquired the Swedish entertainment company Eventum. Today EMA Telstar has created a complete business, putting on concerts with international artists, tours with national bands and artists, running the theatre and concert venue Cirkus in Stockholm and now through Eventum dealing with various sporting events such as the tennis tournament Stockholm Open and the Swedish rally.


The biggest Danish independent agency for over nearly three decades, DKB, has cooperated with the Swedish EMA Telstar for several years, and only six months after EMA Telstar was taken over by the American Clear Channel Entertainment in 1999 it was bought up by EMA Telstar.


At that time Steen Mariboe from DKB said to the international concert magazine Pollstar:


– We are in sympathy by being a part of a growing international network.


Today most of DKB’s activities concern the production of concerts, although last year, they organized a visit from the famous total theatre Cirque du Soleil. But according to the newspaper Jyllandsposten and Thomas Johansson from EMA Telstar, DKB, will be restructured over the next five years, to be similar to EMA Telstar in Sweden.


– We will be working on a broader spectrum, therefore we are looking for an entertainment company like the Swedish Eventum. We have to get involved in theatre and shows and also sports events like our deals with the American ice hockey league NHL, which brings teams to both Sweden and Finland. Finally we have to develop concerts with national artists in Denmark, says Thomas Johansson to Jyllands Posten.


When Odense Boldklub last year choose to buy the Danish festival Midtfyn Festival, the club did what other football clubs around the world have done. Clubs like Manchester and Chelsea in the UK, and clubs in Germany and USA have transformed into entertainment companies, as the other Danish clubs FC Copenhagen and Brøndby have done. Today FC Copenhagen puts on concerts in Parken, arranges the Danish Eurovision Song Contest, and has now bought the concert serial Rock Show and the internet based ticket distribution company E-Billet (E-Ticket).


In the same way Odense Boldklub is now striving to be more than just football. The club has just opened it’s own shop for the sale of football clothes and accessories, it has its own radio station, it has hired a troupe of cheerleaders and is presenting rock music as entertainment at half time during football matches.


– Football clubs have to be more visible than before towards their fans and supporters. We have to make associated experiences for them as part of a branding strategy, which will make us more than a football club, said the director of Odense Boldklub, Kim Brink, to VIP News last year. It is now proving that this was the right strategy for the Funen football club. Recently the club announced another important step towards being a strong musical organization.


The people behind Midtfyns Festival and the largest Danish festival, Roskilde Festival, have recently decided that in the future they will coordinate their work concerning the organizing of their music programs in order to reduce the competition of artists playing both festivals.


– We have been in competition with each other before over some artists, and we will do in the future but not so often. Now we know, what each of us is standing for, and we can pass offers on, which fit the other one better. At the same time we can avoid that the agencies from abroad are playing us off against each other through a price war that only they can benefit from, says the leader of Roskilde Festival, Leif Skov to the Danish newspaper, Politiken.