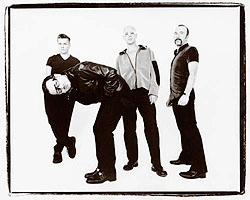 (ClebrityAccess MediaWire) — The Rock and Roll Hall of Fame has released a list of 113 first time eligible artists for the 2005 induction–an artist's first record had to be released in 1979. U2 is the only odds on favorite to not only make the final ballot but to be inducted. The Pretenders are the only other artist who should make the final ballot. Interestingly, they were on the 2004 eligible list last year, presumably in error. They released their eponymous album in 1980 but a single in 1979 makes them eligible for 2005 induction.

Female artists have had a rocky road with induction in the Rock Hall with Patti Smith being denied four times (three as a solo artist and once as the Patti Smith Group) although Joni Mitchell and Bonnie Raitt have been inducted. There have been some years when no female artist has been enshrined.

Santana To Be Honored At Latin Awards

LOS ANGELES (AP) — Carlos Santana will be honored as the Latin Recording Academy's 2004 Person of the Year for his professional, cultural and social contributions to music.

Santana, 56, will receive the honor Aug. 30 at a tribute dinner and concert in Los Angeles, the organization announced Tuesday.

John Kay To Be Inducted Into Canada's Walk Of Fame

(CelebrityAccess MediaWire) — John Kay of Steppenwolf will be inducted into Canada's Walk of Fame on June 23 at a nationally televised ceremony in Toronto's Roy Thomson Hall. The singer/songwriter/guitarist will join Canadian-bred Neil Young, Joni Mitchell, Robbie Robertson, Shania Twain, Jim Carrey, Mike Myers, Dan Aykroyd, Wayne Gretzky and Lorne Michaels, among others, in the Hall of Fame with sidewalk stars in Toronto's Theatre District. Longtime friend Peter Fonda, who has known the group since he and Dennis Hopper included two Steppenwolf songs in the seminal '60s film "Easy Rider," will induct Kay at the gala event.

This honor follows the June 1 release of the John Kay & Friends DVD and a reissue of Kay's Heretics & Privateers CD on Rainman Records. The DVD was recorded live in November 2002 at the Renaissance Center in Dickson, TNand features 19 of Kay's best known solo songs along with some of Steppenwolf's biggest hits ("Born To Be Wild," "Magic Carpet Ride"). The re-release of Kay's 2001 solo CD features four acoustic bonus songs not included on the original disk. The new tracks are acoustic versions of four songs that also appear with full band arrangements: "Endless Commercial," "I Will Not Be Denied," "She's Got The Goods," and "For The Women In My Life."

Kay, who has been legally blind since childhood, was born in war-torn German, but immigrated to Canada with his mother in 1958. He began learning how to play the songs he grew up listening to on Armed Forces Radio and was then immersed in American folk and rock. Steppenwolf formed in 1967 and have sold over 30 million records–nine of which are gold in the U.S.–and toured the world over. To date, the group's music has been heard in 61 feature films and 67 TV shows.