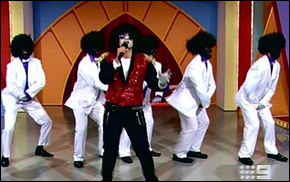 ADELAIDE, Australia (AP) — An Australian variety show host has apologized for a skit in which singers parodying the Jackson Five performed in blackface.

American singer and actor Harry Connick Jr., who was serving as a guest judge on Wednesday night's "Hey Hey It's Saturday," was visibly shocked by the skit, in which four men with afro wigs and blackface sang and danced behind a Michael Jackson impersonator wearing white makeup.

Connick, 42, gave the performance a zero score and told them that if it had been done in the United States it would have been pulled off the air.

Blackface was a traditional trope of minstrel shows in the U.S. that dates to the 19th century. Whites playing stock black characters — usually offensive stereotypes meant to demean — rubbed coal, grease or shoe polish on their faces. Blackface performances are not common in Australia.

Public reaction to the "Hey Hey" performance in online forums was mixed. Some Australians said they were embarrassed such a racist sketch had been broadcast, while others said detractors were too politically correct and that the skit was funny.

Host Daryl Somers apologized to Connick at the end of the live show.

"I know that to your countrymen, that's an insult to have a blackface routine like that on the show, so I do apologize to you," Somers said.

Connick said he would not have appeared on the show if he'd known about the skit.

"I just want to say, on behalf of my country, I know it was done humorously, but we've spent so much time trying to not make black people look like buffoons, that when we see something like that we take it really to heart," he told Somers after his apology.

Anand Deva, the frontman of the "Jackson Jive" act, said it was not meant to cause offense but added he would not have performed it in the United States.

"Hey Hey" ran for 27 years starting in 1971. The "Jackson Jive" group first appeared on the show 20 years ago and were invited back to reprise their roles during the second of two reunion shows for the once-popular program.