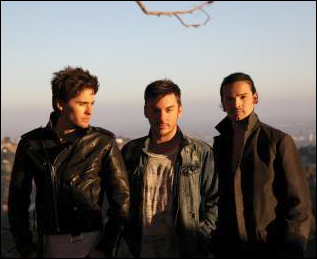 announced U.S. dates of their Into The Wild world tour starting April 9th at the Pearl Theater in

Las Vegas, NV through May 13th at the Fox Theater in Oakland, CA. The Into The Wild tour is the

band’s first tour in 3 years and is in support of their new album ‘This Is War.’ The tour kicked

off last week in Nottingham, England where they played to sold out crowd of 10,000 screaming fans.

Wembly Arena and the Paris’ Bercy stadium. Mute Math and Neon Trees will open the U.S. leg of Into

“This Is War,” the albums’ title track and second single impacts alternative radio on March 1st. It

currently in the top 5 on the alternative playlist charts. “Kings & Queens” is the band’s second #1

single and third top 5 hit. The platinum selling A Beautiful Lie’s “From Yesterday” reached #1 in

to be retired from the Billboard chart after a 52-week run. The video for “Kings & Queens, a short

and received airplay on Fuse, MTV, MTV2, MTVu, VH1 and Music Choice. “Kings & Queens” will be

featured in the trailer for the upcoming Warner Bros. animated film “Guardians of Ga’Hoole” and

most affecting” by Billboard debuted at #2 on the alternative album and digital album chart, selling

nearly 71,000 albums in the first week. The album features thousands of different album covers, as

friends, fans, musicians, artists and many other notable persons submitted their own photos to be

used on individual covers as part of the band’s innovative Faces of Mars campaign. Not only are

singing on tracks throughout the album. The band invited fans to attend summits in 8 different

countries and online, where they recorded a variety of sounds, choruses and versus for the album.

Formed by brothers Jared Leto and Shannon Leto, Thirty Seconds to Mars have over 100 million views

on YouTube, 40 million plays on MySpace and more than one million fans on iLike/Facebook. The band

over, one-by-one, garnering the band a growing and loyal fan base.
Video for “Kings & Queens”