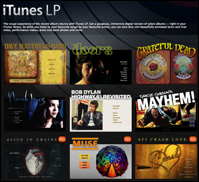 When Steve Jobs promised that the new iTunes LP format would reinvigorate the album concept for the digital age, he apparently did not mean music by indie artists. Brian McKinney of Chicago indie Chocolate Lab Records did some digging:

"We approached our distributor a couple weeks ago to see how we go about submitting an iTunes LP to the iTunes music store. The response was that Apple was charging a fee of $10,000 to produce them, but aside from the cost, they were not being opened up to indie labels (like ourselves). That chapped my hide a bit because what we lack in huge budgets at Chocolate Lab, we attempt to make up for with quality and services. Take for instance the iTunes booklet. We’re now designing booklets to be included with every CLR iTunes album download. They’re not expensive to make, but we want to do everything we can to give the end consumer the best experience possible."
There are rumors of changes in pricing and polices at Apple. In fact, Tunecore has delivered at least one indie project as an iTunes LP though they too told Hypebot that Apple was considering applicants on a case by case basis. For now, however, $10,000 is out of reach for most indie labels and bands.

But iLongPlay, a South American startup, has a far less expensive alternative.

Based in Uruguay, iLongPlay's two man team have just released their first non-Apple Creative Commons
licensed iTunes LP, "Listen" by Tryad. Partners Juan Silva and Pablo Boquete appear to be the only ones producing iTunes LPs outside Apple and hope to do more.

When asked if Apple knew of their work, Silva replied, "They are not aware, we are releasing it just now, but we are not using any of its technology, we base our framework on an open source one. We don't use TuneKit." He adds, "We have developed our own code, and we believe this will be beneficial for Apple, having others developing LPs outside Apple may give iTunes even more popularity."