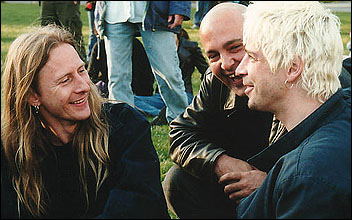 On April 19, 2002, our friend Layne Staley was found dead in his home. The official cause of death is still
unknown.

Yesterday, we all managed to come together in Seattle; it's good to be with friends and family as we struggle to
deal with this immense loss … and try to celebrate this immense life. We are looking for all the usual things:
comfort, purpose, answers, something to hold on to, a way to let him go in peace.

Mostly, we are feeling heartbroken over the death of our beautiful friend. He was a sweet man with a keen
sense of humor and a deep sense of humanity. He was an amazing musician, an inspiration, and comfort to so
many. He made great music and gifted it to the world. We are proud to have known him, to be his friend, and to
create music with him.

For the past decade, Layne struggled greatly — we can only hope that he has at last found some peace.

We love you, Layne. Dearly. And we will miss you … endlessly.

Layne's family has asked that the media honor their privacy as they mourn their loss; we ask that you respect
their request.

Layne's family has requested that contributions may be made in Layne's name to:

"I am incredibly saddened by Layne's passing. His voice, lyrics and powerful presence were such a big part of
what made Alice in Chains so special. On behalf of everyone at Columbia and Sony Music, I offer my
condolences to Layne's family, friends and his millions of fans the world over. We have all lost a gifted artist and
a great friend."