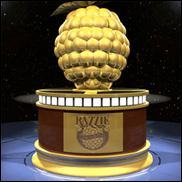 LOS ANGELES (CelebrityAccess MediaWire) — With so many Berry Bad Movies to choose from, voting members of The Golden Raspberry Award Foundation decided to spread their dis-honors among multiple titles for their Gala 30th Annual Razzie Awards. In ceremonies presented on Oscar Eve at Hollywood's Barnsdall Gallery Theatre, no less than six 2009 releases received at least one gold-spray-painted statuette designating them as being among last year's Worst Achievements in Film.

The big "winner" was also one of last year's biggest box office hits: The overlong, over-loud, under-whelming toy-based sequel Transformers: Revenge of The Fallen. In addition to taking Worst Director for The Boy Blunder of Blow-‘em-Ups Michael Bay, Fallen also fell victim as the year's Worst Screenplay and Worst Picture. Worst Actress was awarded to a star who could well follow up the berry next night with an Oscar® win: Sandra Bullock, Razzed for her performance in All About Steve. The film also took the Worst Screen Couple dis-honor, for Bullock and co-star Bradley Cooper. Worst Actor went jointly to Disney Boy Band The Jonas Brothers, playing themselves in Jonas Brothers: The 3-D Concert Experience. Supporting "winners" were Billy Ray Cyrus, riding his daughter's coat-tails and playing her dad in Hannah Montana: The Movie and Sienna Miller as the former girlfriend and current nemesis of the main character in G.I. Joe: The Rise Of Cobra. One of last year's biggest box office bombs, Land Of The Lost, started the evening with a pack-leading 7 nominations. But the $150 million production (which grossed a humiliating $49 million in the U.S.) wound up only "winning" as Worst Remake/Rip-Off or Sequel.

In celebration of three decades of Dissing Hollywood's Biggest Under-Achievers, special awards were also given for Worst Picture of the Decade (Battlefield Earth, which "won" by a landslide) Worst Actor of the Decade (Eddie Murphy for Adventures of Pluto Nash, I Spy, Imagine That, Meet Dave, Norbit and Showtime) and Actress of the Decade ("Celebutant" Paris Hilton for The Hottie & The Nottie, House Of Wax And Repo: The Genetic Opera).

Worst Picture of 2009: Transformers: Revenge Of The Fallen (aka Trannies, Too) (Dreamworks/Paramount)

Worst Actress of 2009:
Sandra Bullock
All About Steve

Worst Director:
Michael Bay
Transformers: Revenge Of The Fallen (aka Trannies, Too)

Worst Picture of the Decade:
Battlefield Earth
Nominated For 10 Razzies® / "Winner" of 8
(Including Worst Drama Of Our First 25 YRS)

Worst Actress of the decade:
Paris Hilton Nominated For 5 "Achievements," "Winner" Of 4 Razzies
The Hottie & The Nottie, House Of Whacks,
Repo: The Genetic Opera